I'm taking a brief break from the long and twisting tale of my adoption search story to return to some hard numbers about my publishing journey. I do this periodically, mainly because I believe in transparency and it helps me maintain perspective.

First caveat: I am almost entirely self-published.
Second caveat: I do very little promotion or paid advertising. I have a small mailing list of under 1000 subscribers. I could probably earn more/sell more if I focused on this side of the business.
Third caveat: I walked away from amazon page reads to keep my books widely available. This resulted in a definite drop in income that I'm starting to recover from. It was a long term choice to eschew the immediate money for long term sustainability.
Fourth Caveat: I have learned I can write/publish a book a year and no more than that.
Fifth caveat: YMMV

This is an overview of my earnings from January of 2012 through yesterday, August 7, 2018.

I've marked when each of my 8 novels were published. They are color coded for the series they belong to.

A few things to notice:

2014 was an anomaly year. In June of 2014, I published DERELICT, the first novel in my space opera series, Halcyone Space. I did little that I hadn't done for my prior books, but this one (forgive the terrible pun) took off like a rocket.

There were fewer books being published in 2014 and Amazon's algorithms (impenetrable to mere mortals, then and now) somehow picked up on a week or so of modest sales and decided to promote the book in its genre newsletters.

Unfortunately, I had no way of capitalizing on this good fortune directly, as Amazon doesn't share its sales intel. While I had my social media links in the book and a link to my newsletter, I had no way to directly promote to all those readers.

One year later, when ITHAKA RISING was published, (book 2 of the series) I had no way to let all the readers of book 1 know it was out. And Amazon didn't magically do it for me. You can clearly see the tiny bump in income for that release. However, sales of all books over the following months were slightly higher than in the prior year.

In 2016, I had greater traction with the release of DREADNOUGHT AND SHUTTLE, again mainly due to the power of Amazon: At that point, I had taken the newer books exclusive to Amazon in their Kindle Unlimited program and a big chunk of my income that year was through page reads.

Book 5 (PARALLAX) debuted in 2017, when I had pulled out from KU to have all the books available wide. My income between mid 2017 to mid 2018 was given a lovely boost by a .99 Bookbub feature on DERELICT. 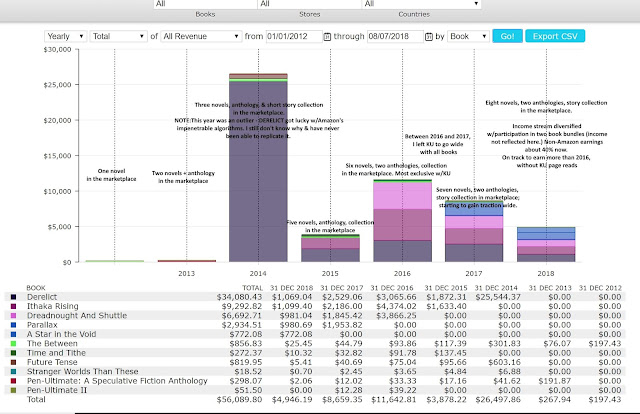 This second graph is a yearly comparison of earnings between January of 2012, when I published my first novel, through yesterday, August 7, 2018.

With 8 novels in the marketplace, and a completed series, and greater traction on non-Amazon marketplaces (especially Kobo), I'm on track to exceed my KU exclusive/boosted-by-page-reads 2016 income.

If you omit the outlier of 2014, and factor in the switch from Amazon exclusive to wide, the trend is towards higher earnings year on year with more books available in the marketplace. (Note: the 2018 bar is only 7 months of the year and doesn't include the earnings from my latest bookbundle participation.)