This is Me: An adoption story, part 5


For anyone just stumbling on this story, the earlier installments are here:

After that intense, emotional, incredible first conversation with my new uncle, Paul and I continued to talk - via phone, email, and text. Over the next weeks, we got to know one another.

I found out more about my sprawling family tree, including cousins and an aunt (Paul's half sister through my maternal grandfather) who is almost a decade younger than me! I had several phone and email conversations with her and she is lovely, kind, thoughtful, and welcoming.

I then had a long chain of email conversations with Ed, learning about Robin as an adult. They were very much in love and had a very happy life together. She's been gone now 8 years and I know he misses her keenly, still.  He was even able to find and send scans of some old photos of Robin, from when she was in her 20s.

Ed was thrilled to know something of Robin's survived her death. Even he hadn't known about me. He and I continue to be in contact.

And here's where I have to pause to repeat that writing cliche: truth is stranger than fiction. My experience has confirmed that is very much so.


I mentioned in an earlier episode of this tale that my uncle Paul and I had mutual friends. It goes deeper than that. We had been at the same science fiction & fantasy conventions, not once, but several times. Balticon in the Baltimore area and Arisia and Boskone in Boston.

These are not huge conventions. It is more than possible that he and I were at the same sessions and never knew there was anything other than a fan connection between us. In fact, we were both invited guests at cons and might have bumped into one another in the 'green room'.

Paul retired from his teaching and his work with SETI (yes, the listening in outer space for sign of alien life!) and performs as a filker - think a combination of Weird Al and Tom Lehrer with a science fiction twist. He is unbelievably smart (2 PhDs), a lifelong geek, and with a sense of humor that prizes cleverness over mockery. Reader, I adored him. Even before we met (spoilers! We got to meet!) I knew I would feel comfortable with him.

We discovered that we were both invited guests at Boskone, to be held in Boston February of 2018 - just a few months away. I was thrilled that I'd have the chance to meet him and we made plans to have my family join me there as well.

Then a few conversations later, he asked me if I would be attending Arisia - another Boston con, one that takes place in January. Because he was able to attend and was hoping to meet me even sooner.

And here we are. 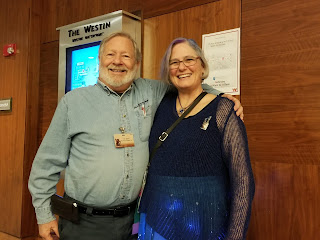 We sat near the con's registration area and talked for hours. He would often break off in the middle of a thought to stare at me and smile, remarking how much a particular expression of mine was so like Robin's.

Was it remarkable and incredible?