I occasionally offer my blog to fellow creative travelers and today it is my great pleasure to hand over this space to Lancelot Shaubert.

I first met Lance through the Writer Unboxed community and attended several writing retreats with him in the past few years. He is a bright, driven, passionate artist in all senses of the word. A writer, a musician, a filmmaker, Lance is someone whose vision includes collaboration and connection. I am honored to know him. Honored to be named a mentor by him. Honored to be part of his anthology.

Lance sent this to me when I was experiencing a low moment - feeling as if my creative work was at a dead end and not reaching or touching an audience. I didn't know until reading this how profoundly my story had moved Lance. He saw in it elements I did not consciously intend, but as all art is a construction between artist and audience, I am honored by what he sees in it.


I leave you his thoughtful piece to consider.

The Metaphysics of Sci-Fi
Lancelot Shaubert 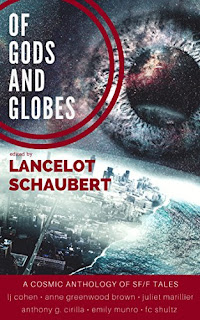 Since the meaning of anything is first and foremost the meaning of everything, sci-fi stories can carry a heavy metaphysical burden by virtue of containing lots of things: big things, small things, multiple planets full of things and so forth. When it comes to awakening the metaphysical import of science fiction inside of me, no living author has done so both through their craft and friendship more than LJ Cohen.

It seems every time we get together, she and I end up talking about meaning and philosophy and metaphysics. Time and again, both in those talks and through her work, she proves that sci-fi carries that burden better than any fiction genre other than fantasy. Take her most recent short “Perpetual Silence” from the Of Gods and Globes anthology I edited this summer. For starters, I cry every time I read her story. No exaggeration. I cry every time I read her story for the amount it says in so little, the weight it carries with such honesty and curiosity and melancholy: this is a story that gets the essence of nostalgia, of Sehnsucht.

Spoiler alert for those of you that care about such things (though I tend to think spoilers enhance rather than detract from the reading experience), but her story features a young woman researcher creating an instantaneous comms link in the distant heavens through a satellite. It’s like internet for deep space, a phone call to the other end of the galaxy. Strictly speaking, this should be impossible, but they figure it out. Problem: this instantaneous communication works like a virus and erases all lag from all communication between satellites. It’s inconvenient to the scientist long-term and she terminates her team’s life’s work in an instant of code. Why?

“She’d called the universe. The universe had called back.” She sought the ultimate consciousness behind infinite being and total reality and that consciousness responded. It scared her enough that she shuttered the program.

Think about that: she discovered and verified prayer. The story’s a metaphysical and astronomical argument for prayer. And for why we don’t pray: we’re actually scared of an answer, scared of the grounds of all reality, of the necessary and sufficient cause of being having... well... a mind of its own.

It’s not the only time an author asks such questions in a sci-fi story.

Star Wars quite famously proffered a sort of gnostic dualism as the grounds of its magic system. Dune dealt with the nature of prophecy to affect not only space, but timelines, and what time means for one’s identity. Firefly asks classic existentialist questions over and again: particularly the "Out of Gas" episode where they ask why does a screwdriver exist? Why is there such a thing as a screwdriver when there should be nothing? When a screwdriver and none of the material or efficient causes of a screwdriver can possibly contain the cause of a screwdriver’s being, moment to moment?

The Martian, of course, asked if raw conscious courage can trump mindless matter. The Foundation (poorly, I think) asks questions based on the Hegelian picture of history (bolstered poorly by the Wellsian picture of history and mythology), questions that Sanderson picks back up in Elantris and... in a way... stumbles through to something like a more holistic picture.

The Man in the High Castle more than any asked if America would ever create true art, a true work of beauty (one that delights in making intimate the great distance between two things while preserving said distance) when we Americans obsess on the one hand with our hyper utilitarian purgation of art and on the other hand with profiting off of commodities and frauds?

If art, in other words, makes a new culture by preserving our own special uniqueness via a singular intimate encounter with what’s us and no one else, then we ought not (1) worry about profits first, for art is not advertisement, nor (2) worry about how many copies of our work exist, for art is about preserving that beatific distance in an intimate encounter and not about the proliferation of our namesake, nor (3) the efficacious or tangible or systematic affect of our work on the immediate society, for art is about the seventh generation and not about us and therefore the virtue it forms in us is far more important and far-reaching than whatever system it could tweak or technology it could inspire.

Though, strictly speaking, the Elon Musks of today are a few generations removed from the scifi of yesterdecade.

And then there’s Station Eleven, a sci-fi book written by a literary author (whatever that means) who typically writes for The Millions. Emily St. John Mandel builds a whole book out of graphic novel meta references and quotes from Star Trek claiming things like SURVIVAL IS INSUFFICIENT as well as songs and skits from a rag tag traveling orchestra and theater company — all of this points to the value of science fiction and dreaming of the future in a post apocalyptic world mostly killed off by the flu.

She ends the book with the first set of folks taking off in the first plane since the plague, dreaming of the first ships sailing in the dark since the crisis, and drawing a clean line between the sci-fi of today and the best parts of that science fiction vision which motivated The New World mythos, Columbus and all...

Whether or not the metaphysics of the 17th century was true — or whether or not the Manifest Destiny it upheld is just or beautiful or good — is a question for another day, but no one can deny that the idea of Manifest Destiny showed up first in 17th century science fiction. After all, the metaphysicians and fictioneers of that time were only following in a literary tradition solidified by Dante — an author only willfully stupid readers would claim had no metaphysical impetus behind his description of that great reversal of gravity the protagonist of Inferno experiences while passing down the frozen demon’s belly button.

Lancelot Schaubert has sold hundreds of stories, articles, and poems to markets like TOR (Macmillan), The New Haven Review, McSweeney’s, The World Series Edition of Poker Pro, The Poet’s Market, Writer’s Digest, and many similar venues.

To grab a free copy of chapter one of his best written work (slated for 2019) and his best song, click here.