2015: Looking Back, Looking Forward, Ever Grateful

". . . to stay open to new possibilities and new opportunities as they arise."

Well, I'm pretty sure I've managed to meet that goal. And along the way, I've done a ton of work writing, publishing, and networking, despite a year that was also full of personal struggles and loss. But that is what makes up a life. And despite grief, setbacks, and disappointments, I know that I am extremely fortunate.

I both love and am loved. I have the support from family, friends, and readers to continue to do this writing thing that challenges and fulfills me. Stories and characters continue to surprise and delight me.

It's easy to lose perspective in the day to day slog of survival, which is one of the reasons I do these round up posts.


While the release of ITHAKA RISING didn't match up to the amazing and surprising success of DERELICT, I'm confident in my process. And I'm confident in the quality of the book. It will find its audience. I will continue the series through at least another book or three. It seems like the further in to the universe I get, the bigger it becomes and the more story I uncover. 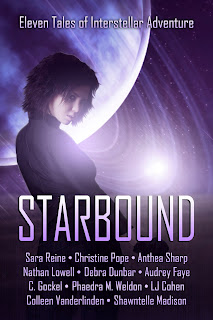 To you, who have taken this journey with me, I offer my thanks and my gratitude. Writing stories for readers to enjoy is an enormous privilege. Beyond the sales numbers and the Amazon rankings, and the frustrations of signal boosting and struggle to reach an audience, is the sheer joy of seeing a reader engage with and be moved by something I've created.

That moment of connection is magic. It's what drives me to keep going during the solitary times where I'm staring at a blinking cursor, not knowing how to find the next words.

Thank you. If you have read a book of mine and enjoyed it, if you have reviewed it, or recommended it to a friend, or sent me an email, or signed up for my newsletter, or added a word of quiet encouragement, I am grateful.

My promise to you is this:  I will keep writing and keep creating worlds for you to lose yourself in. Or maybe to find yourself. If I can do that, I will be content.

Email ThisBlogThis!Share to TwitterShare to FacebookShare to Pinterest
Labels: audiobook, Derelict, Ithaka Rising, publishing, The Between, Time and Tithe, writing