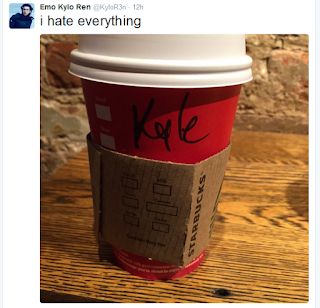 I'm going to talk about The Force Awakens here and specifically why I think the movie did a good job with Kylo Ren's character, so if you haven't seen it, you probably don't want to read this.

By now, if you're a Star Wars fan and have a social media presence, you probably have seen the parody twitter account 'Emo Kylo Ren.' It's pretty funny. And it would be easy to walk away from the movie and all the internet commentary feeling Ren is the WORST BAD GUY EVER.

I mean the guy throws temper tantrums like any three year old who doesn't get his way. How are we supposed to take him seriously?

But after mocking his character along with just about everyone else on the internet, I've come to rethink my position.

From a writer's perspective, I think Kylo Ren's character is pretty spot on.

Here is someone who from his birth was groomed to be someone special. Look at his parentage. His father is the most famous pilot/scoundrel in the universe. His mother, the leader of the rebel alliance and the daughter of Darth Vader. His uncle, also Vader's son, is the last Jedi. And here comes little Ben - named for Obiwan Kenobi - with all the hopes and expectations of the universe on his shoulders.

He has probably internalized the belief that he will be responsible for the rebirth of the Jedi order AND lead the rebel forces AND be good at everything in the process.

And that's not all. Because of who he is and what he represents, he's also a perfect target for the Dark Side.

So here's this kid, stuck in the middle of a huge battle for the destiny of the universe. Before he learns to talk, he knows he's a symbol. And that stronger people than him have carried that weight and failed.

Of course, when he allows himself to be seduced by the Dark Side, his master/teacher doesn't really take him seriously because he's not important in and of himself, but as the symbol he has become. On some level, he surely knows this. Else why use Vader - someone who is beyond his reach AND who redeemed himself in the end - as his personal patron saint?

Given all that, how could he be anything other than the insecure, confused man-child that he is? Don't we have plenty of examples in the real world of the children of celebrities and the wealthy/powerful flaming out in spectacular ways?

It is my hope that future stories will let us see his struggle and development as a character. Darth Vader was this evil dude - powerful, effective, sure - but also one dimensional for most of the original trilogy. (I'm old school, not talking about any of the prequel stories because it's my blog and I don't have to!) I find a villain with vulnerabilities and a developmental arc a lot more interesting.

And that's why Kylo Ren is perfect, just the way he is.