I'm a longtime baseball fan, and since moving to the Boston area in 1991, lost my heart to the Red Sox. I've blogged about baseball before, but not too often as this is a writing blog, not a sports blog. :) To mix the two up--writing and baseball--I've written a few poems about the game and my memories of it from childhood as well.

Usually, I listen to the games on AM radio, or watch them on TV. It's hard to get tickets to Fenway, and expensive factoring in there are 4 of us in the family. But yesterday, my husband called me late in the afternoon and asked if I wanted to go to the game that night. Someone he works with had extra tickets. Now, I'm not a spontaneous person. I dithered for about a nanosecond and jumped at the chance to see a game live.

It was a 6 pm start and given the vagaries of Boston rush hour traffic, we didn't get there until *after* Manny's 3 run homer, but we did get there in time to see the bench clearing brawl after Coco Crisp got hit by a pitch. (Retaliation for a retaliation for something that happened in the game the night before, or something like that.)

Here's some pics we snapped: 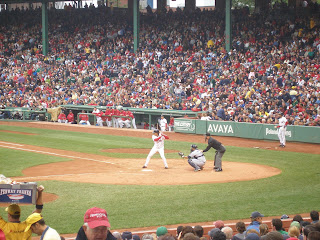 This is Coco at the plate, before all hell breaks loose. I turned to say something to my husband and his colleagues and missed the actual pitch that hit him. 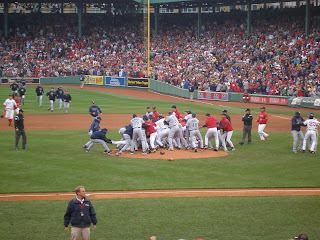 This is what happened after Coco took a run at the pitcher. I couldn't see Coco in the melee, but when we saw the news later, we saw that the TB pitcher had swung on Coco first and missed. Coco swung on the pitcher and connected and then was buried by a whole scrum of TB players before the benches cleared and the free-for-all started. 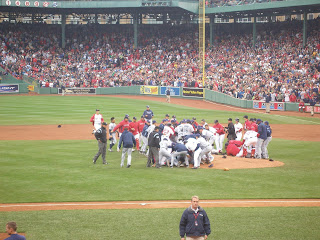 Another of the 'scrum' 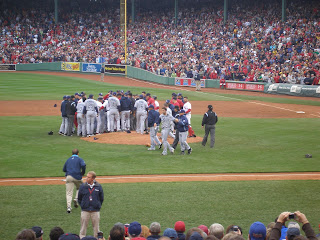 And here's a shot showing a TB player being 'escorted' off the field. He doesn't look too happy.

I had a moment of uncertainty when the mood of the crowd at Fenway got a little ugly. It's hard to be around that much testosterone and not feel a little threatened when it starts to express itself. I wouldn't have wanted to be in the security guards' collective shoes staring down a crowd that large and that riled up. Fortunately, no fans tried to mob the field. I can certainly see how stampedes happen in the soccer games in Europe. Once the crowd gets agitated to a certain point, a few guards aren't going to cut it. This sort of ugliness doesn't happen very often in baseball and that's a good thing.

It took a good 15 minutes, but the game got back underway, though not without the undercurrents of anger displayed by both teams. 4 more hitters got hit by pitches, 2 of our players (including Youk, but he *always* gets nailed by pitches), 2 of theirs, but I think they were just 'shit happens' kind of things--nothing deliberate as far as I could tell.

Another day at the ballpark. . .

*edited to add a link to all the pics we took that night*
Posted by Lisa Cohen at 7:56 AM

Email ThisBlogThis!Share to TwitterShare to FacebookShare to Pinterest
Labels: baseball