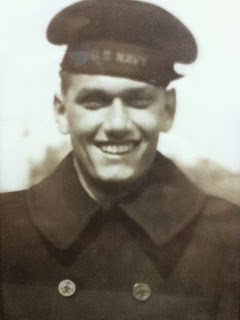 He enlisted in the Navy during WWII and became a sonar operator on two ocean going tugs, the USS Abnaki and the USS Surprise.

This photograph was taken at the very start of his adult life. He grew up in Brooklyn and had barely ever left NY State before traveling to Scotland to go to sonar school. The war eventually took him all over the world.

When this photo was taken, he hadn't yet gone to war. He hadn't experienced brutal storms at sea or played hide and go seek with German subs in the Atlantic ocean.

He hadn't yet played his role in hiding the one enemy submarine captured in wartime, that gave the allies the information they needed to break the enigma code. 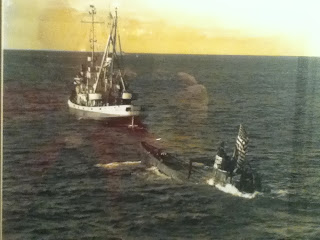 This is a photo of his tug, towing the U505 after its capture. I grew up hearing stories of this submarine and his moment in history. (Fast forward to my own adult life - I had the opportunity to be on the sub when I lived in Chicago, as it's on permanent display at the Museum of Science and Industry. It gave me goosebumps.)

He hadn't yet met his wife. He hadn't been a father (twice! Once flying from NY to California to bring back their adopted newborn daughter; me), or mourned all the babies my mother hadn't been able to bring to term.

He hadn't yet had his long career as a successful business man, with a house in the 'burbs and the ability to send his two daughters to college.

He hadn't lost his parents or quit smoking or retired down to south Florida yet.

He was just a teen, full of energy and optimism, with a penchant for practical jokes and a ferocious work ethic.

I look at this picture and I see the man I call 'Dad'. That boyish grin is still there. He still likes to tease and play practical jokes. 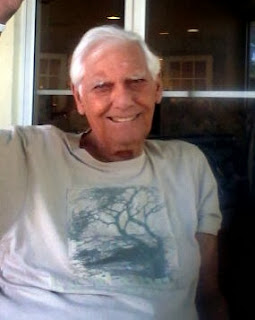 This is the picture I snapped with my phone just the other day. At 90, my father is still fighting. He has significant health problems, is on dialysis, and has an inoperable aortic aneurism. He lost his wife of 57 years to complication of dementia a little over a year ago. Yet through it all, he has such amazing resiliency. He's been in rehab for the past several weeks and works hard in therapy every day, even on the days he's at dialysis. He makes friends with everyone around him, staff and other patients, and will be happy to argue history or politics on any day of the week.

I know it's a cliche, but I'm going to say it anyway: My father is my hero. I'm so glad to be able to be here with him on Veteran's Day, to honor him for his service.