Halloween 2013: The Doctor Who Edition

Ever since we moved into our home, nearly 21 years ago, I have enjoyed decorating it for Halloween. It's a nearly 100 year old brick tudor, so it really lends itself to the haunted house vibe. Besides, when my husband and I were in our respective High Schools and then in College, we both enjoyed the tech side of theatre. So it was a natural match to pair our imaginations and creativity with Halloween.

You can search the 'Halloween' tag on this blog to see what we've created, going back to 2005 when I started blogging. There are many years of themes we have photos of buried on a hard drive. Some day, I'll find and organize them all.

It's a ridiculous amount of work for one night, but that's part of the magic, I think. In the past, I've struggled to come up with the theme, but not this year. From the moment Halloween 2012 ended, I knew I wanted to do something to honor the 50th anniversary of Doctor Who. It's a show near and dear to my heart: I've watched it since I was 12. I still have the color changing pin I got for joining the Doctor Who Fan Club of America in the 1970's.

So I decided to build a TARDIS.

If I'd had my 'druthers, I would have built a permanent structure from plywood and then used it as a garden shed after Halloween, but time and circumstances made that impossible, so I grabbed a bunch of moving boxes we had in the attic and started to build. 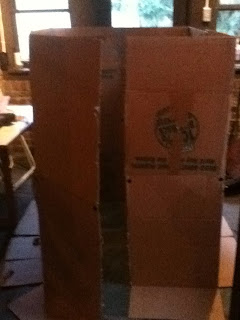 If you notice the small black 'dots' holding the levels together, those are cardboard box rivets I found on the internet. Reusable and very clever. 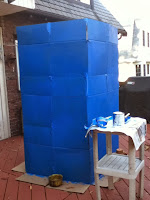 I bought paint and a foam brush, because you really don't want to soak cardboard with paint, or it will collapse. I love TARDIS blue. 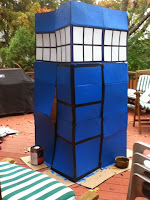 Now this is starting to look distinctly more TARDIS like. White paint and black electrical tape for the windows and 'box' trim on the body. If I'd had more time, I would have used paint. One of the disadvantages of living in a changeable climate come fall, is that the shift in humidity makes it tough for the tape to stick. 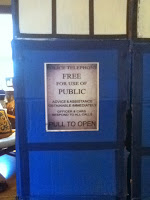 Of course, we needed the door sign. Fortunately, images of the sign exist all over the net, so I grabbed one, manipulated it to be 8 1/2 by 11, and printed it as a photo on photo paper. Hot glue guns are your friend for adding detail work, as well as fixing any spots where the paint made the box edges spring apart. 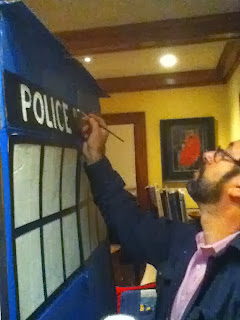 My secret weapon is my husband, who has wonderful handwriting and is far more artistic than I will ever be. My contribution to the signage was to paint the panel black. 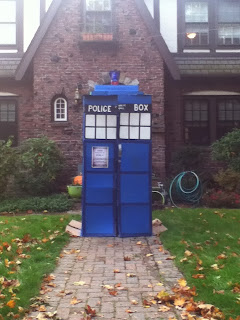 And there she is, my TARDIS, parked every so completely inconspicuously in front of the house. The roof was constructed with a small box and then insulation squares taped together with blue painter's tape to make the leveled top. The lantern was a battery powered lantern we had, covered with blue lighting gels, courtesy of our local HS theatre department.


And this is what it looked like on Halloween eve, with the addition of the 4th Doctor (me!) and some Doctor Who themed pumpkins (weeping angels, daleks, and cybermen, oh my!)  and lights, fog, etc.

If you want to see the whole set of Halloween night photos, taken by my husband, photographer extraordinaire, here's the flickr link. 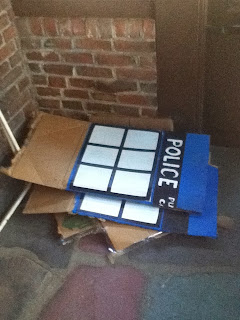 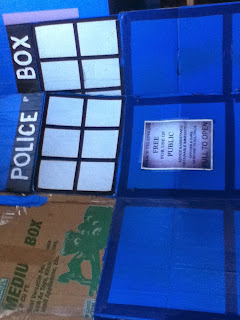 And if you've ever been involved in theatre, you know the particular mix of sadness and satisfaction that is strike.
Posted by Lisa Cohen at 9:17 AM