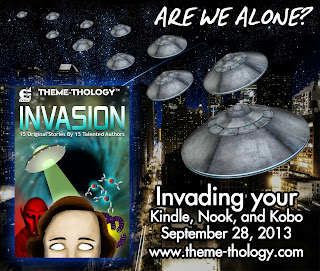 Anyone who knows me knows I spend a lot of time on social media. But I promise, it's not *all* wasting time.

I'm especially active on Google+, where over the past year, I have gotten to know a host of creative artists, photographers, and writers. G+ is basically my virtual water cooler; a place I where I can drop in and have a conversation, follow an interesting link, or share my frustrations and/or daily writing triumphs.

It's also a place to network and to collaborate.

Somewhere in my G+ stream, I stumbled across a call for submissions to a series of themed anthologies through Charles Barouch. His idea was to put out a theme and see what his fellow writers would create, based on it. The first "Theme-Thology" theme was 'invasion.'

Interested authors were asked to create a story based on their interpretation of the theme. The only direction we received was that these stories needed to fit in the speculative fiction genre. The rest was completely up to our creativity. That's the kind of challenge I really love and while I mostly write novels (short stories are *hard*. I think they're actually harder to write than a novel) I decided to give it a go.


Charles created a G+ community where the Theme-Thology authors could workshop their pieces privately, which created a lovely peer group. In addition, he solicited artists to create the cover as well as create an illustration for each story. All the artists and writers were active folks on G+.

For me, the process combined the best parts of a writing prompt, a critique/support group, and a publication opportunity.

After recently completing an anthology project of my own, I can tell you it was a whole lot simpler just submitting a story and letting someone else have the headache of deadlines and organization!

Well, the Theme-Thology: Invasion is now live and my story, "I was a Teenaged Alien" is included. Probably less of a full scale alien invasion than the running away of one alien teen, it none-the-less fits the theme. It's somewhat of a departure for me, being a bit lighter and less serious than my usual writing and it was inspired by living with my own teens, who at times were fairly alien to their own mother. :)

You can buy the e-Book here, on Amazon. Other platforms will be live shortly and I'll update the post with those links.

I have also submitted a short story for an upcoming themed anthology called "The Day I Died." If you're interested in the Theme-Thology concept, or want to know what other collections are forthcoming, take a look at HDWPBooks.
Posted by Lisa Cohen at 5:54 PM