As most writers learn, drafting a book is not the same as writing one.  To write a finished story is to enter the world of rewriting, of editing; of revision.

Some people dread the revision process, but I really love it.  For me, a first draft is like prepping all the ingredients for a lovely meal.  It's necessary and it is a start, but it's not something I'd want to sit down and eat.  Where it all comes together for me is in revision.

I recently completed a soup-to-nuts (to push the food metaphor. . . ) revision of a novel I initially wrote in 2005-06 called "MindBlind."  A thriller that started as a series of what ifs (as most of my stories do):  What if there were individuals so empathic that, in essence, they could read the emotional states of others?  What if that 'hyper-empathy' was often so overwhelming to children that the state was classified as a disorder?  What if the adults that "passed" as neurotypical felt they had to live closeted lives or be subject to radical treatment?

From there, came the central premise of MindBlind:


A lifetime of 'passing' as a mindblind has saved Isabel Jepsen from the treatment for hyper empathy that left her older sister Kathryn self-centered and emotionally stunted. When Kathryn becomes an unwilling subject in a government sanctioned medical experiment, Isabel must reveal the truth of her hidden nature to the man she loves and ally herself with the psychiatrist who pioneered the treatment she has been avoiding all her life. Isabel risks far more than her anonymity in the race to save Kathryn. If the man who took her sister discovers Isabel is also an empath, she fears she will become his next test subject.

My first few iterations of MindBlind was as a near future SF story.  When I pulled it from the trunk this year to give to some of my crit buddies, their feedback made it clear that in the intervening years, time had caught up with my Science Fiction and the story sat well in contemporary time.

But that wasn't the heart and soul of what needed to be done in the revision.  I knew there were pacing issues.  I knew the ending wasn't strong enough.  I knew some of the characters didn't shine.  So I committed myself to solving the novel's problems.  And for that, I needed some new tools.

One of the tools I used for this revision was Larry Brooks' "Story Engineering" book.  I started out looking at what I saw as the flaws and did this brainstorming:

Then came more thoughts about how to strengthen my protagonist, Isabel:

Added to the 5 pages of handwritten notes (I'll spare you more of my chicken scratch),  I also dug into the story's structure with Brooks' template.  I wrote my own version of his basic design of looking at the story in quartiles and used it as a worksheet. 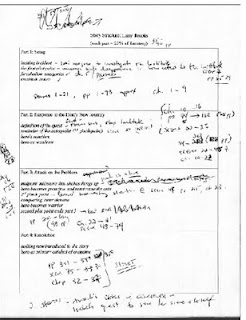 What I discovered in my initial look at the quartiles was that my ending 25% of the story was more like 10-15%.  It was too short.  That's where my intuition about pacing came in.  There were some places earlier where the story dragged out as well.  Ultimately, I put it all together: enhance the characterization, sharpen the stakes, make each scene advance the plot cleanly, make the hero the primary mover/shaker of the conclusion for a net addition of 6K on the story.

That brought the balance essentially in line with Brooks' four part structure.

What did I learn from this?

1--that my structure instincts are essentially sound.  For the most part, what I wrote through my first few drafts wasn't critically far off from the ideal structure.

2--that structure isn't confining; it's freeing.  Once I was able to look at the architectural underpinnings of the story as a separate thing from the story itself, I could make changes easily, without feeling like I was tearing out the heart of the novel.

3--Having a lens to examine revision was extremely helpful to me. It helped keep me from getting caught up in sentence level tweaking, which, although part of the overall process, was a different mindset from structural work.

4--that revision is what can make a good story a better one.
Posted by Lisa Cohen at 10:39 AM