My older son is taking a philosophy class in his senior year in high school and I've been fascinated by the conversations he's been having with us about what he is learning.  Yesterday, we had a pretty wild discussion about Nietzsche and nihilism.  Having never taken a formal philosophy class, what I understood about Nietzsche could be summed up as life is pointless, why bother.

Kind of like Eeyore from Winnie the Pooh on steroids.  Or maybe hyped up on amphetamines.

However, according to my son, nihilism has more in common with zen Buddhism than with anarchy and chaos or hopelessness.

More in line with, meaning doesn't matter. We are a sum of our sensory impressions and everything changes.  Yet, instead of falling to despair at that realization, Nietzsche urges us to live fully in the moment.

Pretty heady stuff to be discussing with your 17 year old.

Many of the tenets of Buddhism appeal to me.  Mindfulness is the basis of art, of poetry, where my writing emerges from.  And staying in the moment, living in the sensory body is a practice that I began in meditation many years ago.

Today, the universe decided to give me a quick and dirty lesson about impermanence.  (Yes, I realize I'm anthropomorphizing here, as well as creating some central meaning out of nothing.  So sue me.)

Today I was giving a quick tour of cool places nearby our home to some friends from out of town.  I wanted to show them the neat antique mansard home that I found shortly after I had finished writing 'The House of Many Doors.'

So I drove to the library and around the back to the parking lot.  When we got to the street behind the library and looked to our left, all that was left was a chain link fence bordering the hill lot where the house had once stood.

For a moment, I was speechless.  Devastated.  Someone had demolished *my* house and I hadn't even known.

I think all this time, I had believed that someone would love the abandoned property, had bought it, and had decided to renovate it to its former glory.

But the house is a piece of ephemera.  Impermanent.  Perhaps it stood on that steep lot, overlooking the main street of the town for more than a hundred years.  But that is not forever and no house will last forever.

It was a place, a place I was lucky enough to experience and enjoy.  Now it is gone, but that does not diminish my joy from it.

Here is one incarnation of "The House of Many Doors," which now only lives in my memory. 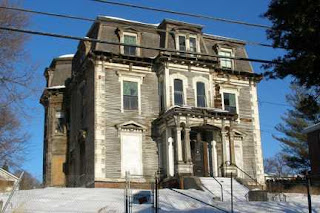 Email ThisBlogThis!Share to TwitterShare to FacebookShare to Pinterest
Labels: family, house of many doors, writing