A rambling post about editing, rejection, and the red fox on my lawn this morning

I wish I had had the presence of mind to grab a camera. But, alas, it was before my first cup of coffee and I was mainly annoyed at how loud my dog was barking. (Before said cup of coffee. . . ) 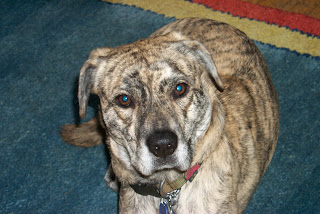 My youngest son called me to the front door and there was a beautiful red fox on our front lawn staring at my crazed, barking dog. (Tigger looks pretty calm here, doesn't she?  That's because there's no fox, rabbit, or squirrel taunting her.)

Anyway, I got to the door in time to see this sleek, bushy tailed fox pick its way carefully across our lawn and into our neighbor's yard, without a care in the world, completely ignoring the yelps and yowls from Tigger, trapped on the wrong side of the door.

It made me realize that while we may think we live in settled, tamed suburbia, there is a remarkable world living beside us that we rarely notice.

So. Rejection. Anyone who has put him or herself 'out there' knows it all too well. Over the past 6 months, my 11th grade son has taken several leaps of faith and tried out/applied/submitted himself in a bunch of different areas. And last week, he experienced the pain of having responses come in for all of them. And every last answer was 'no.'

It could have been soul crushing. It could have led to fury and despair. I know my own soul ached for him. And yet, he moved through it all with a grace and a humor that I envy. Certainly, I did not have that ability when I was his age. Hell, I'm not sure I have it now.

One of the things I told him was that one's true character is defined not by our successes, but by how we handle our disappointments. By my accounting, my son is an extraordinary young man.

I wrote the first draft for "Future Tense" in a furious bout of creativity and typing over 12 weeks this fall. All while my house was falling down around my ears, and family stressors pulled me in six different directions at once. A dear writing friend (waves to Wen!) agreed to read/crit that first draft and she did an incredible job, giving me 7 pages of notes.

At the time, I wasn't ready to really study them, so I put them and the draft aside to work on some other things. Fast forward a few months later, and I was ready to take on the revision.

The process I've taken for this story is different than for the 5 novels that preceded it. For one thing, I've never written a draft so quickly before. For another, I'd not written a book with such little advance planning either.

What I discovered, and Wen's crits confirmed, was that this story had really good bones. Characters that weren't "TSTL" (the link focuses on romance novels, but you'll get the idea), a plot that mostly hung together, and a solid hook and premise.

What the story needed was a bare-knuckled no-hold-barred edit where every scene is scrutinized for clarity, purpose, tension, and flow.

Sounds a lot simpler than it is. :)

But, I'm actually loving this process. I'm about halfway through and have added close to 6,000 words to the story. (I write lean in my first drafts. Others write extra and need to pare, still others a mix of the two.) I'll keep you posted.
Posted by Lisa Cohen at 9:39 AM