Coincidences and other strangeness 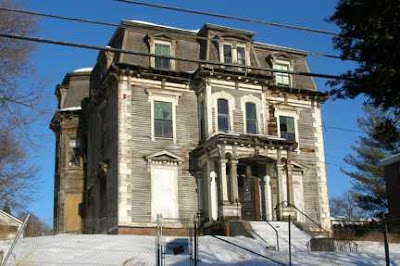 Several years ago, I set out to write a story about a haunted house. That was the story that became "The House of Many Doors," my YA urban fantasy tale of a boy who must challenge a house for the life and sanity of his father.

I had an image of the house from the old TV show "The Adams Family" as a model for the house. So I fired up my computer, went to google and searched for the show. Got a picture of the house and went to architectural websites to find out what kind of house it was. It was important to know as much as I could, since the house becomes not just setting, but another character.

That's how I found out about Mansard/Second Empire houses.

So, fast forward to last month. A query for "Doors" went through the rounds and I was fortunate to hook the interest of my agent. While I was riding that high, after the "call" and signing the contract, I happened to run an errand to the library one town over from me. I go to this library quite often, but almost always park in the front. This time, there were no free spaces and I had to drive to the back lot. I looked up and saw the house. The picture I've posted above is essentially Parker's house. (In fact, it would be *perfect* if it were brick, not clapboard, but then I would *really* have gotten me weirded out!).

There are a lot of Mansard homes in our area, but I'd never seen one with the windows boarded up and with 'keep out' signs everywhere. It seemed like an omen of sorts. :) A good omen, even though it's a spooky house.
Posted by Lisa Cohen at 5:11 PM

Email ThisBlogThis!Share to TwitterShare to FacebookShare to Pinterest
Labels: house of many doors