This year, I am participating in the August Poetry Postcard Fest. Each day for the month of August, I will be writing a new poem on a postcard and sending it out to a poet from a list of 31 I obtained from the organizers. This is even better than a message in a bottle. I know my poem will be read by a poet. In turn, I will receive 31 poems, written by 31 different poets living in all parts of the world.

I will be posting my poems here, a few at a time. I am sending a combination of purchased post cards and home made ones, created from photos my husband or I have taken. Where I have made a card, I have posted the photo next to the poem it inspired.

These poems are written 'on the spot', organically, so represent first thought/first draft.

I am not armored
like the turtle. My skin
is permeable to possibilities,
a membrane too porous
to shut out starlight, dust
from an ancient ashfall,
the taint of pesticide,
disappointment. Today, clarity.
Water pearls at my feet.
I can breathe.

Nectar drunk, bees lurch
from bloom to bloom. We eat
the fruits of their awkward labor--
alchemy of tilled earth,
air, fire, water. Such an ordinary
magic. Tomatoes blush
for your attention. You split
one pole to pole, each seed a ruby
suspended in its own raindrop,
each seed a renewal of your vow. 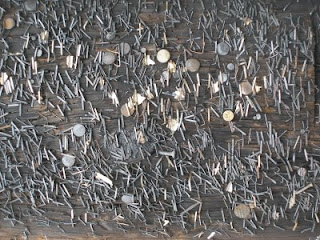 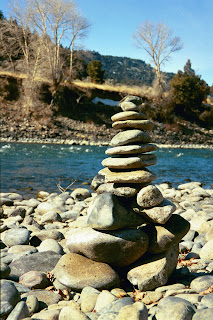 When you were small
you laid bricks on bricks, leggos
on leggos, towers reaching
taller than your mark
on the doorframe's edge.
Each night I would wield
the wrecking ball, scatter
pieces to plactic tubs, pile
sanded rectangles in neat stacks.
All that time, I was building, too,
a jumble of prayer stones, memorial
to transience, to possibility,
to the builder's art.
Posted by Lisa Cohen at 4:17 PM