"Are you still there?"

Last weekend, my family and I took a trip to New York City to attend the Bat Mitzvah of a dear friend's daughter. I used to live in Manhattan and haven't spent much time back in the heart of that city in quite some years, so I was thrilled to play tour-guide to my husband and sons.

We ended up finding a quirky hotel in Chinatown that cost less than the GNP of a small nation per night. The hotel was shoehorned between green grocers and fish mongers on E. Broadway at the foot of the Manhattan Bridge, but it was clean and comfortable and newly renovated. We didn't even need a shoehorn to get into our (large by NYC standards) room. :)

On saturday early evening, we decided to do some sightseeing. We promptly got stuck in the small elevator between the first and second floors. 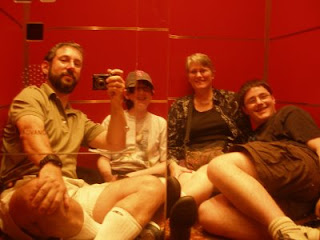 We ended up trapped in there for 45 minutes. Notice how *small* the elevator was.

Every once in a while, the hotel manager would knock on the elevator door and ask "Are you still there?"

And every time, it struck me as just as funny as the first time. Um. Where *else* would we be???

We did find out (out of sheer boredom) what happens when you put 4 cell phones on speaker phone and call one another with the phones in close proximity. The sound echoes through all 4 phones, distorts, and feeds back into something that sounds like it should be a Science Fiction effect. 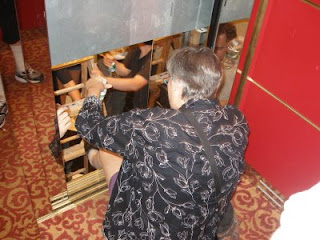 This is me climbing out of the elevator.


Strangely enough, my kids thought it was the highlight of their weekend.

I think the hotel folks thought we were a little loony. Even by NY standards.

We only sang Kumbaya once.