The complexities of fathers day 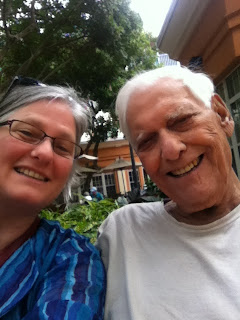 I've been thinking a lot about fathers lately. Not just about the wonderful man who raised me and who I said goodbye to for the final time four years ago, but also about the word father and its multiple meanings.

While the noun versions of both father and mother denote the people who raise a child, the verb forms hold quite different connotations:  To mother is to nurture. To father is to contribute genetic material to a child.

That dichotomy says a lot about our society and the roles - often highly gendered and artificial ones - we allow/encourage/support for mothers and fathers. There has been much written about that double standard and I won't rehash it here, other than to recount a personal story:

My husband and I are parents of two sons; now grown adults. But when they were small, I often played the role of solo parent while my husband had to travel for work several times a year. It was not seen as anything unusual, and I wasn't offered any special support during those times from friends and family.

When the children were young - perhaps 3 and 5 - I had to travel for a week to a conference on the west coast. While my husband was fully prepared for his stint as a solo parent, judging by the reactions of friends and family, you would think that either he was utterly incompetent (he's not), or that somehow the job of parenting itself had suddenly changed to require a village (spoiler alert - it has always been so) in the absence of a mother.

My father didn't father me, but he most certainly parented me.
The man who fathered me didn't parent me.

I've been thinking a lot about this in relation to being an adoptee. Finding my genetic family over the past year and a half has been both a life-changing discovery and also one that hasn't really altered my core identity. Perhaps this is because I was in my 50s and fully settled in my life with a family of my own at the time.

I have more to relate in the ongoing story of my adoption search, but last summer, I found my birth father and spoke with him on the phone for the first time. I am grateful for his life. I am grateful that I was able to find him and complete a piece of his history. (Short version - my birth mother was his girlfriend. Her mother didn't approve of him and sent Robin out of town when she became pregnant with me. He never knew.)

There's no way to know who I might have been if the people who created me had also been the people who raised me. How much of me is genetic/nature, how much is environment/nurture? Even learning about much of my genetic family over the past year and a half, I can't answer that question.

Perhaps it doesn't matter. I am the sum of my influences and experiences, as all of us are.


While I would like the chance to meet my birth father, I'm not looking for a new parent. There's no way to encapsulate a lifetime of history and caring and transfer it to a new relationship. We are just an interesting coda in each other's lives. He went on to parent three other daughters. I was parented by a wonderful father. Even if it were possible, I wouldn't change my past. 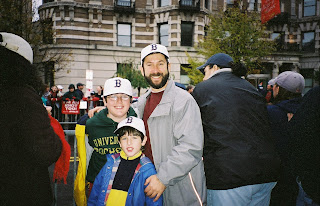 And to the father of our children, my co-parent and partner in all things: my love, always.