This is Me: An adoption story, part 3


I had to laugh when several people who I'm connected with on social media mock-chided me on ending the first 2 installments of this story on cliffhangers. Yes, I'm a novelist, so part of what I do as a storyteller is to ramp up the stakes to keep the reader interested. However, where I chose to stop each piece of the story mirrors my own experience during this journey. As I replied to them: #sorrynotsorry

For several days, I sat with the knowledge that I had a new uncle in the world, and that he'd had a close relationship with his sister - my birth mother. I studied her image in the photos my friend had linked me to, searching for the kind of resemblance she clearly saw. But mostly, I tried to read between the lines of my uncle's website to figure out what kind of person he was.

Clearly, he was a geek. That was a huge point in his favor. And a scientist with an interest in astronomy and space. He'd been involved with SETI, which set my own geeky heart racing with excitement.

So in the quiet of the house one day, I decided to send him an email, through his website. I clearly stated who I was, who my mother had been. The circumstances (as I understood them) of my birth and adoption.

And then I waited.

A few days went by and I was convinced that this, too, would be a dead end.

And I realized I didn't want it to be. More than that: I needed to make contact.

Maybe that sounds selfish. I'm willing to admit there is an element of selfishness in pursuing old secrets, regardless of how revealing them might affect other people. But there's also some degree of feeling I had a right to know my own history. And certainly, I had a duty to my children to find out about our genetic legacy.

So when I didn't get a reply, I searched for my uncle on Facebook. I figured that someone with such a large internet footprint would likely have a Facebook profile.

That was not really surprising.

What was surprising was that we had several friends in common. People I had met and interacted with over the course of several years. One an editor of a small press out of Brooklyn. The other, one of my fellow members of Broad Universe.

By this time, I had traveled with my husband to Denver, where he was attending a conference and where in a few days, I would be attending a science fiction convention.

So from our hotel room, I reached out to my editor friend, and sent him a private message on Facebook. 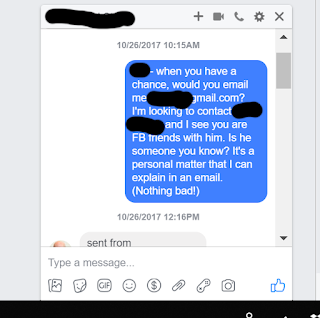 And when my friend replied with his email, I sent him this:

Well, it's kind of complicated and a little wild, but. . .

[redacted] is my maternal uncle. And I only discovered it a few days ago.

You may or may not know I'm an adoptee. ([other mutual friend] and I talk a lot about how weirdly parallel our lives are). I had obtained my records - which were scanty - about 30 years ago and didn't do anything about it until my eldest was born 25 years ago. I contacted my birth grandparents and long story short, they weren't very pleasant and hung up on me. End of the line. End of story (I thought).

Over the years since, I would occasionally search for my birth mother, but nothing showed up. Then I thought the records burned in our house fire in 2010.

I was looking for something in our attic and found them in a box of random paperwork and decided to do one more search.The good news is I found her. The bad? She died in 2010. But I was able to find bits and pieces of other information, including that [redacted] was her older brother.

If he's someone you know, and you feel comfortable pinging him on my behalf, I'd really appreciated it. I think you know I'm not an ax murderer or wacko stalker. And if geekiness is carried in the gene line, I know where mine comes from. :)

I also reached out to a filker I know through Broad Universe who knows him as well.

So that's what's up.

My friend wrote back right away, that he indeed did know my uncle and would be happy to forward a message from me.

I think it was only a matter of a few minutes when I received an email.

The subject line read: Call your Uncle Paul
The email began: We have lots to talk about.


Alone, in a hotel room in Denver, Colorado, I had the biggest, loudest, ugliest cry I've ever had in my life. Huge gulping sobs. It felt like my heart was heaving so hard it was going to tear itself apart.

I couldn't catch my breath. I couldn't sit still.

I wasn't alone in the world. After losing both my folks in a five year span, I had felt as if I'd been orphaned. All my aunts and uncles had passed away and an entire generation was gone. Never mind that I was a married woman in my 50s with a family of her own. Never mind that I had a sister, cousins, neices, nephews, in-laws, I was suddenly among the oldest generation in my family of origin. And I felt that I had no one to call on to ask for advice, or look to for their experience. It was a very lonely place.

But in that moment, I knew no matter what came next, I was not alone. That some part of me was still alive and welcomed me home.