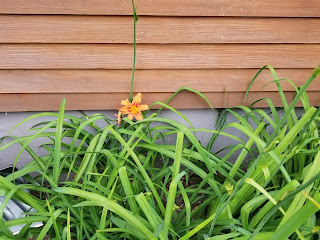 For much of the past week, I've been at StarField Farm with my friend Jayne.

She had a week's vacation and needed a major recharge. I was more than happy to have an excuse to spend time in the quiet of my personal "Rivendell" and recharge as well.

For the first time in a long time, I let myself just be. No deadlines. No writing projects. No to-do lists.

I immersed myself in the quiet and the day to day.

Watched the day lilies and was rewarded by seeing the first bloom.

There has been a little swallow's nest tucked in the beam of the back door porch. The babies had finally fledged and were looking mighty cramped in the nest, but were refusing to leave. 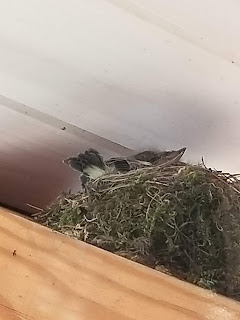 It's hard to see with my cellphone photo, but there are three fully fledged swallows crammed into this nest. The parents spent the better part of several days swooping over the nest and yelling at the babies to get off their asses and fly, damnit. Well, that's my translation of bird anyway. 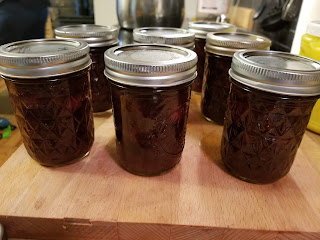 Our most ambitious endeavor of the week entailed making strawberry rhubarb jam. The strawberries were ones I'd picked last June and frozen, when I knew I wouldn't have the time to deal with them. The rhubarb was fresh picked from just outside the kitchen door.

Until this year, I didn't know rhubarb was something to cook with or eat. It looked like weird celery. It's leaves are poisonous. Who looked at this strange plant and decided it was food?

The jam was fabulous. I adore making jam. For those of you interested, I don't use a recipe, per se, but have honed my methods from these sources:

https://nwedible.com/how-to-make-pectin-free-jam/ My favorite resource for playing with making jams.

https://www.southernfoodways.org/southern-summer-in-a-jar-jam-secrets-from-april-mcgreger/  same method as above,but with the basic ratio I've found the most helpful for fruit and sugar.

Speaking of local food, we also ate tons of local asparagus and strawberries. It's hard to pass up local food in season. So we didn't. :) 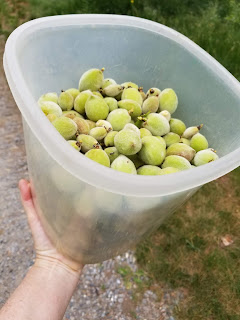 I also culled the peach tree. (Full disclosure - this is a photo from last year, but the peaches were about the same size this year when I culled them.) This city-mouse has never had fruit trees before, but I have learned that peaches (and many fruit trees) do best if you cull the fruit when it is small to avoid overloading the tree and having it use all its energy to make fruit. Otherwise, you get decent harvests every other year rather than every year.

There is a kind of patience you learn living like this. You can't hurry peaches. They ripen in August, no matter how impatient you are for them.

Most of the nights this week were overcast, and while there wasn't a lot of opportunity to stargaze, we did experience a wonderful consolation prize: fireflies. Jayne and I spent most early evenings on the swing out front watching the dusk deepen, waiting as the birds settled for the evening, spotted the dragonflies dancing, and the first swooping bats. And then the fireflies would rise. I know they're just bugs, but there does seem to be something magical and otherworldly about them.

So Jayne and I spent a lot of time watching the world go by. Over the course of the week, we saw birds and hawks. The aforementioned dragonflies, bats, and fireflies. A deer came to visit on two occasions and I lost count of the rabbits. (The dogs, I'm sure, did not.) Jayne thinks she saw a bobcat slink by one morning. There is a deep silence here and it sinks into your bones.

And then there was one clear night. I had fallen asleep with the dogs in the living room. When I woke up is was well past midnight. I took some time to stand out on the front stoop and watch the stars shine overhead.