The Art of Halcyone Space

About a month ago, I revealed an earlier draft of this cover art for A STAR IN THE VOID for subscribers of my newsletter. Now, I'm sharing it widely in advance of the June 2018 publishing date of the novel.

Chris Howard has created original art for all 5 of the Halcyone Space novels.

Finally I can display all of these amazing covers together and talk about how each of the images captures the heart and soul of the novel it graces. 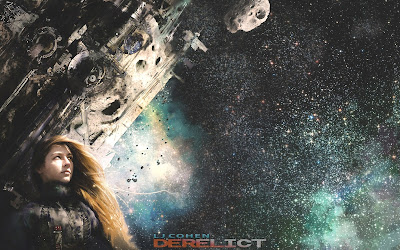 While all of the stories center around an ensemble cast, each story has a single character whose arc stands out to me as primary. In DERELICT, that character was Rosalen Maldonado. At the start of the story, Ro is isolated. As a result of being moved from post to post by her emotionally abusive father, she doesn't have the emotional skills or experience in trusting other people.

I love the way Chris depicts Ro as dwarfed by the cosmos, yet looking up and out as if hoping for a better future. 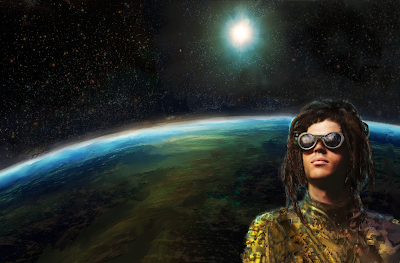 This is Barre Durbin. The story of ITHAKA RISING is the story of brothers, loyalty, and sacrifice. Children of the space station's physicians, Barre and his little brother Jem have always been under pressure to excel. But ever since Jem outstripped him academically, Barre has felt like a failure. His relationship is particularly strained with his mother who can't  appreciate Barre's musical genius.

The main storyline borrows from the myth of Orpheus and Eurydice. Barre, like Orpheus, relies on his musical skills to enter the Underworld and rescue a loved one.

I love the look of quiet determination on Barre's face in Chris's image. 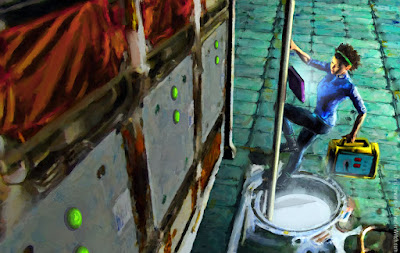 Devorah Martingale Morningstar (Dev, and she would be the first to mention how ridiculous her name is) enters the world of Halcyone Space in DREADNOUGHT AND SHUTTLE. She is a character who emerged as simply a minor player but after her first scene, I bent to the wisdom of my subconscious and let her be who she needed to be for the story.

She is a materials science student at the University Micah Rotherwood escapes to. She gets abducted in his stead and taken aboard a stolen ship by her captor. But she is far from a powerless pawn and uses her knowledge and skills to sabotage the ship.

Chris created her with an intensity that matches her character. The image conveys her strength, capability, and focus. 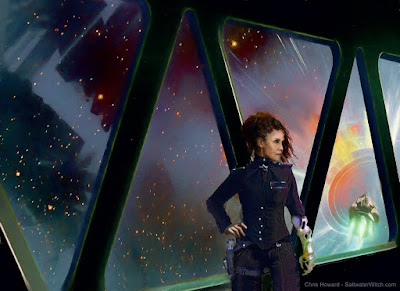 She is an old soldier whose loyalties are put to the test in this story. In a very real way, she is the last soldier standing from a conflict that she had already sacrificed body and soul to forty years earlier.

While she appears a bit younger than I see her, Chris nailed her expression, her body language, and her prosthetic arm. There is both amazing strength and vulnerability here. She may be my favorite non-viewpoint character in the series.

A Star in the Void 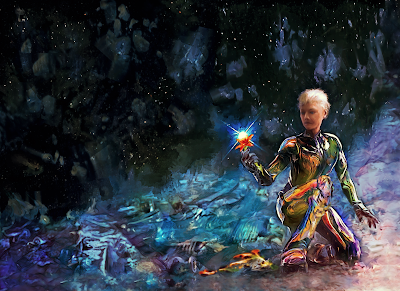 For the 5th and final book in the Halcyone Space series, A STAR IN THE VOID, I asked Chris to use Ada May as the cover character.

While she is only a viewpoint character for a brief epilogue in book 4, she is the character around whom the entire narrative of 5 novels centers around. She was there at the start of the hostilities over 40 years prior. It was her genius that created the first true AIs that made space travel possible. She created the hidden world of Ithaka and its quiet rebellion against the Commonwealth. And her actions at the end of book 4 are the catalyst for the entire plot of book 5.

One of the strengths of Chris's work is that he understands that the power of a cover comes not from depicting a specific scene, but from bringing forth the heart of the story. It should be no surprise that his is a writer in addition to an artist.

Here he depicts Ada's loneliness along with her determination. The title refers to many elements in the story: what it looks like to an observer when a ship takes a wormhole jump, the character Dev Morningstar putting herself at risk in the void for the sake of her companions, the hope Ada holds to for change, among others.

Taken together, these five striking images have helped me tell five individual stories as well as a sixth overarching narrative that spans the entire series. Chris has made magic here and I am grateful for his talent, vision, and time.

If these images and my commentary have piqued your interest, the first four books of the series are available at all online retailers. Links can be found: http://www.ljcohen.net