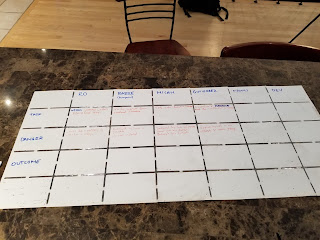 This is the start of Halcyone Space, book 5. After letting the characters incubate in the back of my head for a few months, it was time to figure out the major goals and issues for each of them. This will help me form the main plots and subplots that form the core of the book.

I don't typically do a formal outline, though I will plan out several scenes ahead with one sentence 'blurbs' and once the story really starts cooking, I'll know where each character is and where they need to go. And I do know how the book will end. At some point, near the 75% mark, I typically go back and outline the entire project so I have a sense of its organization. I use this as a revision tool.

I have colleagues that write complete and detailed outlines before starting a single word on the story. That's not my process, but it's no less useful and valid. Don't let anyone get away with saying there's only one way to write a novel.

These beginning steps take some time. Once I find the flow, the story will move more quickly. Having done this a time or three already, I don't panic when I don't make my wordcounts for the day in these early stages.

There is a huge advantage to having gone through the process of idea to beginning through middle and finishing. It's one of the reasons I think it's important not to rewrite your first book over and over again, but to move on to something new. You can always go back to the earlier project and you'll have grown as a writer when you do. (Though sometimes even experience cannot help - I went back and did 2 major rewrites of Heal Thyself and it's still not ready for prime time. I haven't given up hope. Yet.)

I didn't know that when I started on my first novel in 2004. I thought if I kept at it, I could make it work. Four rewrites later and it's still trunked. I suspect no amount of poking at it will bring it to a publishable state. Trust me on this. It's 150,000 words of confused fantasy cliches and badly overwrought prose.

Books 1 through 12 represent my finished novels. 13 and 14 are works in progress. The ones in bold have been published.


That list comprises well over a million words of fiction. (And this doesn't count short stories.) Some of it unpublishable either for issues of quality, premise, or market. But each of the books I completed taught me invaluable lessons and made the next book better.

Halcyone Space, book 4, is my 14th novel.  (Not counting the 2 projects in the mid 2000's not listed here that I wrote about 30K each on and abandoned for various reasons.) Knowing what I know now about my process, (and barring any major catastrophe) I am confident that books 13 and 14 on this list will be finished, revised, polished, edited, and published.

At some point, I'll feel comfortable to share snippets of the work in progress.