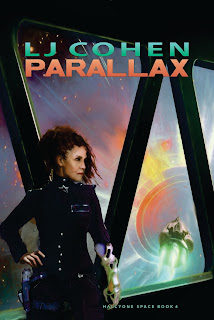 I have done everything I can to give PARALLAX its best chance for success. The rest is not up to me.


Last night on twitter, I posted a bit about this - how by the time a book is out, it no longer belongs to the author. And let me tell you, that lack of control is terrifying.

Think about it: For the time it takes to draft a novel, the author is the Supreme Being On High. We create worlds out of our imaginations. We literally put words into our characters' mouths and thoughts into their heads.

So forgive me if I find this phase of the process enormously nerve-wracking.

I wrestle with the hope that PARALLAX will find its readership and be a big success along with the dread that it might not earn out its production expenses. Realistically, I understand that later books in a series never sell as many as the initial books. I just hope I'm in that sweet spot where it will sell enough to keep the series going and perhaps reignite interest in the first books.

There are some wonderful opportunities on the horizon including a partnership with the folks who brought you HerStoryArc in their new F-BOM (Feminist Book of the Month) project.  I'm very excited at the prospect of bringing the Halcyone Space books to a new readership.

But, still I worry. It's the natural habitat of the writer. I'll be anxious about PARALLAX for some time to come, through it's first few weeks of sales, its first reviews. I'll worry that someone doesn't like it. Then I'll worry that no one's talking about it.

While I hate to say this part of it hasn't gotten any easier for me, despite the fact that PARALLAX is my 7th published novel, at least I'm in familiar territory. And that means I can acknowledge the intense emotions and keep moving forward.

I'm already immersed in a new world with new characters on a new project. That's the only antidote I've found to writer's anxiety.

And while I have your attention, let me remind you that PARALLAX is book 4 of Halcyone Space and all 4 books are available widely, wherever ebooks are sold. They are also available in trade paperback editions. You can find links to all purchase venues at www.ljcohen.net.


DERELICT (Halcyone Space, book 1): A group of teens stranded on a sentient spaceship must work together or risk being killed when the ship's AI wakes believing it's still fighting the war that damaged it decades ago.

ITHAKA RISING (Halcyone Space, book 2): A young computer genius struggling to function with a grievous head injury is willing to risk his life to get a black market neural implant, but what he finds is a planet that shouldn't exist and a rebellion that threatens the stability of the Commonwealth.

DREADNOUGHT AND SHUTTLE (Halcyone Space, book 3): When a materials science student gets kidnapped, she's drawn into a conflict between the young crew of a sentient spaceship, a weapons smuggling ring, and a Commonwealth-wide conspiracy and must escape before her usefulness as a hostage expires.

PARALLAX (Halcyone Space, book 4): Halcyone's crew is drawn into a conspiracy threatening to reignite a galactic war when they discover the hidden power brokers who have been quietly manipulating the Commonwealth for decades.