The personal is political; the political is personal


I have seen a lot of criticism in social media directed to artists, writers, and other creative types that we should stop talking politics and go back to our work.

I get it. Really, I do. And I share the frustration of spending so much of my time curating my twitter feed, facebook, and google plus, sharing relevant and important political updates. Trust me, I'd rather be talking about my next book, or anything else in the life of a writer.

But I can't just pretend that the world isn't in significant flux, and dangerously so. To ignore the political landscape when the people I know and love are being harmed by our current president's actions is to deny the responsibility of my humanity.

So much of what this president has enacted is personal. None more so than his executive order to selectively deny entry into the US of immigrants, refugees, and asylum seekers.

In the summer of 2007, an email found it way to me, forwarded from one email list to another, and it was about to change our lives.

The email was about a young woman from Kyrgyzstan who was about to start her graduate degree in Anthropology and Women's Studies at Brandeis University. She had received a scholarship and money had been raised for the rest of her studies, but she still needed a place to live.

We had never opened our home to someone - certainly someone we had never met and from another country, but there was something about Nurjan's letter that spoke directly to my heart. We had a family meeting (including our two sons, 10 and 13 at the time) and made the decision to offer her housing.


Nurjan moved in with us during the fall of 2007. From the moment she entered our lives, she became family: the daughter I never had; older sister to my boys. She helped me cook, turning the daily grind of meal prep into a shared joy. She taught me the dishes she'd grown up eating - laghman, plov, dimlamah. I taught her our family favorites - pasta with meat sauce, apple cake, roast chicken and potatoes.

I always knew when Nurjan was struggling with writing a paper, because I would find her in the kitchen, cooking for us. I started helping to edit her papers because while her English was quite good, she had some difficulty with the formal language of academic work.

She encouraged my creative writing and I discovered that having another grown woman in the house was an incredible boon, especially having 2 sons and a husband who works 60+ hours a week. Nurjan always talks about how lucky she was to find us as a host family. I know I was the lucky one.

In 2009, our whole family traveled to Kyrgyzstan to attend Nurjan's wedding. She had met Chad, an American, when he had done a stint in the Peace Corp in Kyrgyzstan years before she'd come to live with us. It may have been love at first sight for him. When they reconnected in the states years later, it was clear that he was still in love. (I am still amused when I remember how adamant Nurjan was that she wasn't interested in dating during her schooling and she certainly wasn't going to marry an American and become an ex-pat. When we met Chad, we realized she didn't stand a chance.)


Kyrgyzstan is a place of astonishing beauty and incredible hospitality.  We were able to travel through the country with Nurjan and Chad as our guides and translators and we went to places where Westerners typically don't go, including the highlight of our trip - sleeping in a yurt in the Kyrgyz high mountain plateau - the jailoo.

It was a trip that changed our world views and perceptions, most particularly those of our sons who were young teens at the time. They learned a fascinating paradox: that as Americans, they had a degree of privilege that they had been utterly blind to, and that their privilege didn't mean their lives were necessarily better in all ways. One of the things that struck them then, and has continued to resonate in their lives is the way Kyrgyz community was so much more closely knit than theirs in the US. 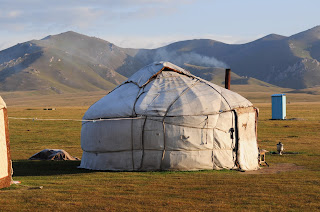 After she graduated, Nurjan and I kept in contact while she and Chad were doing development work in Brazil and then in East Asia. Now they live in the San Francisco area with our two 'practice' grandchildren - their fraternal twin boys who will be 3 next month.

Nurjan is now a US citizen, bringing her rich culture, her heritage, her education, and her global experience to enrich her adopted homeland. Not to mention these two little boys - did I mention we consider them our grandchildren?

Sadly, I don't think their Kyrgyz grandmother will be able to visit them. I can't imagine she will get a visa now, even for a short trip. All because we have a unreasonable fear of the other.


If the current president had been in power in 2007, I doubt Nurjan would have been admitted to the US as a student. She is Muslim, from a country that has had its share of political unrest and sectarian violence.

I think of all the other possible 'Nurjans' who are even now being turned away, dissuaded from sharing their experiences with our polyglot culture. I think about all the refugees and asylum seekers, fleeing from death and destruction in search of better lives for themselves and their children and I am ashamed of my country for shutting its doors.

And for what? To keep us safe? Isolation, anger, and fear cannot lead to safety.

We are safer and our lives are enriched when we broaden our world view to understand other people and their lives.

We are safer and our lives are enriched when we learn to live and love together.

I am grateful for a world in which Nurjan was able to be a part of our lives and hope that world isn't gone forever.