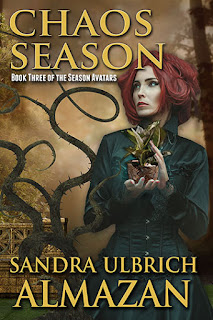 Today I have turned over my blog to Sandra Ulbrich Almazan, a fellow SFF writer and Broad Universe member. But not only is she a member of Broad Universe, she is one of its founders and I also learned from reading her official bio, that she appeared on Jeopardy! (Which is most cool!)

I recently read book 1 of the series and enjoyed the unique world building and mix of magic and religion that inform the story.

Book 3 of Sandra's Season Avatars fantasy series, CHAOS SEASON has recently been published and she has allowed me to post a small snippet for your reading pleasure. Enjoy!

Jenna strode forward until she stood in the center of the lawn. Back on the farm, she used to pull off her boots so she could feel the earth with her feet. Noblewomen, however, wore boots with lots of little buttons that took forever to undo. Jenna had to squat and press her palms into the lawn to connect with the seeds.
These seeds were unlike any she’d ever worked with. They were light, with a leaf-like wing attached to the seed pod. The shape reminded her of a maple seed, but the color was as white as death. Maybe they were the seeds she’d seen earlier. How did they get here so quickly? Despite the hard seed pods protecting the seeds, the new plants inside seemed to sense her magic. She didn’t even have to focus on the seeds before they germinated. Each new plant drew upon its seed pod and wing so fiercely for nourishment they they crumbled to dust. These plants were hungry, hungry as animals, and just as willing to seek out their food.
Jenna didn’t like that at all.
There’s something not right about these plants. I shouldn’t encourage them to grow….
“Hold, two of them!” a man shouted. “Two of the harpies who attacked the most talented, most wondrous Sal-thaath!”
Further shouts answered him. Jenna didn’t speak Selathen, but she did know their word for “Avatar,” and that was the only word she could pick out. They had to be talking about her and Kay. Even if they were here for Ysabel, they wouldn’t mind giving Jenna and Kay to Sal-thaath, the boy who’d attacked Gwen, as well. Jenna had no other plants she could use as weapons, and she couldn’t count on Kay to defend them. It was up to her and the strange plants to stop the Selathens.
Summer, help me, I beg you. Help me make these plants grow faster than weeds.
Each sprout sank a tiny root into the dirt and stretched down deep. At the same time, the seed leaves opened, drinking in faint sunlight shining through the drizzle. The roots spread out and grabbed other plants next to them. The grass turned yellow and brittle, but the new plants shot up tall and thick, sending out heart-shaped leaves—and fine needle-like barbs covering their stalks. Jenna retreated before her own defenses attacked her. But the deathbush—the best name she could give this strange plant—continued to grow supernaturally fast even without her magic. In heartbeats, the stalks towered over her, each shoot half as thick as her waist. The Selathens would think twice about chopping the deathbush down. The spines would prevent them from getting too close. The only problem was the sidewalk to the front wasn’t blocked. Ysabel’s father charged down the path toward Jenna.
Before she could react, Kay stepped forward, her hand raised and her eyes paler than normal. Jenna shivered as a chill enveloped her for a couple of heartbeats. The sidewalk glimmered with a thin sheen of ice. Ysabel’s father slipped, fell, and slid into a deathbush.


Jenna Dorshay t’Reve isn’t your typical farmer’s daughter. Blessed with plant magic, she’s been impatiently waiting to take her place as Summer Avatar of Challen. All she and her sister Season Avatars have to do is tame a Chaos Season, a magical weather storm sent to Challen by a wrathful demigoddess. They’ve done this many times in other lives, but now dangerous plants resistant to Jenna’s magic make Chaos Season worse. Even the assistance of the War Avatar, father of Jenna’s child, may not be enough to stop the plants. Before Jenna can conquer the deathbushes and tame Chaos Season, she must fully link with the other Avatars in her quartet, but to do so means revealing a secret that can tear them apart.
You can find CHAOS SEASON in all the usual places.
Amazon
Barnes and Noble
iTunes
Kobo

Sandra Ulbrich Almazan started reading at the age of three and only stops when absolutely required to. Although she hasn’t been writing quite that long, she did compose a very simple play in German during middle school. Her science fiction novella Move Over Ms. L. (an early version of Lyon’s Legacy) earned an Honorable Mention in the 2001 UPC Science Fiction Awards, and her short story “A Reptile at the Reunion” was published in the anthology Firestorm of Dragons. Other works include the science fiction Catalyst Chronicles series, the fantasy Season Avatars series, SF Women A-Z: A Reader’s Guide, and several science fiction and fantasy short stories. She is a founding member of Broad Universe, which promotes science fiction, fantasy, and horror written by women. Her undergraduate degree is in molecular biology/English, and she has a Master of Technical and Scientific Communication degree. She currently works for an enzyme company; she’s also been a technical writer and a part-time copyeditor for a local newspaper. Some of her other accomplishments are losing on Jeopardy! and taking a stuffed orca to three continents. She lives in the Chicago area with her husband, Eugene; and son, Alex. In her rare moments of free time, she enjoys archery, crocheting, listening to classic rock (particularly the Beatles), trooping as a Jawa with the Midwest Garrison of the 501st Legion, and watching improv comedy.