This house protected by an attack dinosaur 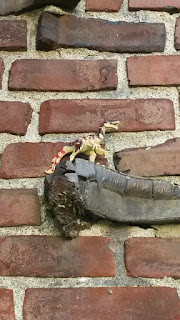 When we moved into our home 23 years ago, we noticed a small plastic toy dinosaur sitting up about about the 6 foot high mark on a piece of knobby brick near the side of the house. I don't remember what kind of dinosaur it was, but it always amused me that it was there.

The prior homeowners had been parents of a small child, so presumably, it was his. Perhaps it fell when they were getting out of their car and one of the parents stashed it up on the brick so it wouldn't get run over. Regardless, we kept it there.

Some years later, perhaps as part of a construction project, or from a storm, the little dino vanished. By then, we had our own small kid and the eldest was a fiend for dinosaurs. So we had plenty to choose from to be our house's protector. I think we picked a stegosaurus. It lived on the ledge for over a decade.

Just this afternoon, I was helping my husband with some work on his car, and I looked up to find our stegosaurus was gone. There had been a severe wind/hailstorm in the area last month and I suspect it blew our protector down. Which may explain why we've had so many house issues this past summer.

A friend happened to be by, talking with us when I discovered the loss. Her grandson lives with her and has a huge stash of dinosaurs. She went home and found one for us.

So now we have a fierce predator protecting our home from all possible threats, and all is right with the world. 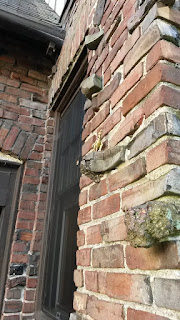