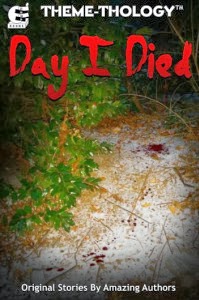 That's a variation of something my 17 year old says and it makes me smile because I now hear it in his voice. What's the thing I wrote? A short story. It's called "The Forgetting" and was written in response to a call for stories around the theme of 'the day I died.'

Here's the opening of the story:

Mariel sat cross-legged outside the mage’s tent for the third day. Or maybe it was the fifth. Her water gourd lay empty by her side and the hot wind whipped dust across her sun-cracked skin like a scourge. She didn’t even flinch when the tent flap opened, slapping her spine. Gens strode past her.

His dark eyes never looked down, but Mariel felt the brush of his annoyance. He mumbled something indistinct and a curtain of sand-fleas rose in his wake. She stared at the red flag snapping at the top of the clan-leader’s tent through a haze of tiny wings, her hands stiff in her lap as the insects attacked with their pincers.

Her empty belly growled; she ignored it. Sand shimmered with heat ripples and it was still morning. Her spine ached and the muscles in her folded legs twitched with the need to move. Mariel set her gaze to an invisible point in the distance beyond the encampment, and waited.

The camp awoke. Men and women swept past her in a blur of colorful robes. She could almost make herself believe she was home and the punishing trip across the sand just a nightmare. Snatches of thoughts floated through her mind even as she tried to shut them out. “. . . seven sols says she’ll be gone by mid-day. . .” “. . . tiny thing like her. . .” “. . . sun-mad if she thinks the mage will. . .” They were blessedly unfamiliar and in their eyes, she was just another supplicant come to beg the mage’s favor, not a murderer, an abomination.


You can read the entirety of "The Forgetting" and a bunch of other stories, each exploring the theme in the newest Theme-Thology, DAY I DIED, published by HDWP Books. Links to all purchase portals available here.

10 stories, each with an ekphrastic poem inspired by it, written by Amanda Rachelle Warren, for $2.99, available in all eBook formats.

(In addition, my story "I Was a Teenaged Alien" is in Theme-Thology: INVASION, also published by HDWP Books.)