The Perils of a Public Life

First of all, greetings from a warm and sunny place. This is the morning view from our porch. 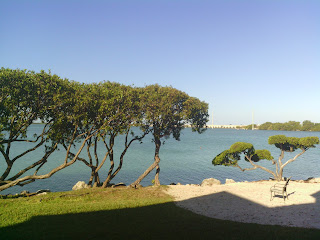 This afternoon, we will be scuba diving in the Florida Keys. My husband and I have been certified divers for 25 years. Our teens are now certified and we'll be taking our youngest (eldest is in college on a different break cycle) on a wreck dive. Stay tuned for underwater photos!

But what I really wanted to talk about today is the less comfortable side of leading a (semi) public life. For the most part, my experiences in social media and the internet have been completely positive. I've been part of several online communities for over a decade and have gone on to meet many of those individuals in 'real' life. All these people have been lovely and gracious and exactly as I had expected, given our interactions over the 'net.

Recently, I have enjoyed participating in Google+, finding a wonderful community of intellegent and creative individuals. Google+ has a text chat feature and I've had some lovely conversations with folks. While I generally don't chat with folks I haven't already developed some relationship with through posts or a g+ community, I also don't believe in being rude, so when a gentleman from the other side of the world began to chat with me, I was polite, while giving clear boundaries.

I had to remove this individual from my circles and delete comments from him on my posts because his interactions with me went from 'interesting conversations with someone from a different culture' to 'stalkerish and inappropriate'.

What made me the most uncomfortable was the way he felt as if he had some owership of my physical appearance, judging by his constant comments about my profile photos on whatever I would post publicly. I have never had this kind of clear experience of the male gaze before.

Regardless of the fact that this man lives a world away from me and doesn't have access to my full name or address and that he never actually threatened me in any way, I still felt unsafe and uncomfortable in the way he assumed my time and my physical appearance existed for his benefit.

That, to me, is the essential danger of the male gaze. That it makes of a woman an object that has no inherent rights to her own self.

That this man kept proclaiming that he only wanted to be my friend, while offering nothing except his desperation and his demands on my time was, in fact, a kind of emotional blackmail in which my reluctance to be mean placed me at risk.

The fact that I was reluctant to block him and felt guilty about it says a lot about the vulnerability of women--even someone like me who considers herself a strong individual and a feminist.
Posted by Lisa Cohen at 9:38 AM