Finding my way back to baseball 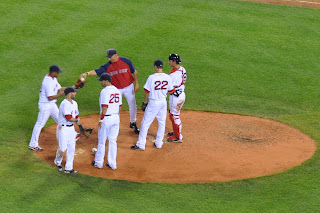 The sound of a baseball game is something embedded in the deep recesses of my memories.  When I hear a game being called, I am transported to childhood, sitting in the back seat of the car, listening to Mets games on AM radio with my dad.

Some folks find the sound of rain soothing, or the whoosh of wind through the trees.  For me, the crowd murmuring behind the commentators is something like a deep lullaby.

When we moved to Boston in the 1990s, we didn't realize we'd transplanted ourselves into a crazy baseball town, but we had, and I started to listen to games here in the spirit of my childhood. It didn't matter to me that the Sox were perennial almost-rans. I was used to losing teams.  It was the cadence and rhythm of the games I loved, and I started to get to know players and feel a true home-town connection to my new team.

I thrilled to follow Nomar Garcioparra in his rookie season; thought I wouldn't forgive the team for trading him.  But the lure of the game sucked me back and I kept listening.

Then my sons came along, grew up, and started following the Sox right along with me.  How could they help it? There were games on in the background of their lives on the kitchen radio and in the car.  When 2004 came along, we were all riveted.  The radio was on in one room, the TV in another.  They still laugh at me for my need to stand in the hallway so I could take advantage of the delay--hear the play as it was coming on the radio, then rush into the living room to catch it on the TV.

We shlepped the kids in the cool rain to the victory parade.  Wow, they were little then! 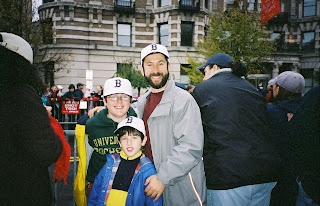 We thrilled to watch the Sox thrive with dynamic players like Yook, Pedroia, and Ells. Gritted our teeth as pitching continued to be a problem.  (Dice-K is probably responsible for taking years off my life in worry alone.)  But we watched, cheered, commiserated, loving the game in all its vagaries.

And then came the 2011-12 season.  The frightening start.  The kick-ass middle.  The implosion of the end.

The scapegoating of Tito Francona and Theo Epstein.

I came as close as I've ever come to hating baseball then.

It seemed full of arrogant and spoiled men, owners and players alike, who had forgotten something important about the game.  That is *was* a game.  Suddenly there was no sense of play in the team. No sense of fun.  It became a corporate win-at-all-costs show and I had no stomach for it anymore.

I didn't follow the team news over the off season.  Didn't count down the days until Spring training.  Didn't watch a single spring training game.  And I realized how sad that made me.  Sad and angry.

I'm not so naive that I don't realize sports is a big business.  That's not the problem.  The problem is in the disconnect between team and fans.  When it gets so big that a passionate, life-long baseball lover turns sour on the game, then something's seriously wrong.

There are games on again on the radio in our house, but I'm not the same person anymore.  I don't feel the pull I used to feel toward the team.  They have lost my trust.  The trust that they will play the game with joy and abandon, play with passion and tenacity, striving to win, and losing with grace.  That they will be a team--that nine men on a field will be somehow one entity, pulling together for a common purpose.

I want to believe that again.  Because I do love this game.
Posted by Lisa Cohen at 5:42 PM