Elegance in Another Age 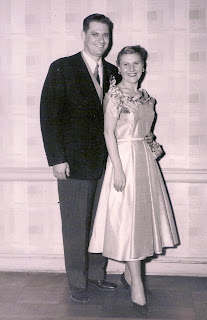 I don't know when this photo of my parents was taken.  There's no date or occasion on the back, but I know it was taken by a photographer in the Bronx, which is where my mother lived when they courted.  If I look at the original very carefully, I can see a ring on my mother's left hand, but not one on my father's, so I think this may have been when they were engaged, so sometime around 1954, perhaps.

Don't they make an elegant couple?

Could they have seen far into their future?  Of parents and siblings buried and mourned; of illness; of children grown; of grandchildren poised at the edge of adulthood.

If they had seen it all, all the joys and all the sorrows, would it have changed the moment this photograph discovered?  I see such a confidence in their faces, as if they knew something the photographer didn't.  See how my mother's head tilts just a little bit toward my father.  See how my father's hand rests on my mother's waist, gently, without confining.  See how they both look out, toward their future together.

They are elegant in this photograph.

They are elegant, still, more than half a century later.

They are elegant still.
Posted by Lisa Cohen at 3:29 PM