One of my kiddos asked me what I would wish for if I could have anything I wanted.

He ruled out the altruistic 'big' wishes, like world peace, and an end to poverty, etc. He wanted to know what I wanted, selfishly, and secretly.

So here it is.

I want to be a scriptwriter for Dr. Who.

Bet you didn't see that one coming. :)

So why didn't I wish for something related to seeing my book in the bookstore, etc? Because I've come to a place where that is less of a dream than the goal I am moving towards. It's out of the realm of fantasy and wish fulfillment because I truly believe it will happen.

But to be part of the magic of Dr. Who? Well, that's fantasy. I discovered Dr. Who as a child. During the Watergate hearings, there was nothing to watch on the major TV networks, so I found that the PBS channel was showing all these British import shows--Dr. Who, The Avengers, Secret Agent, and The Prisoner.

I became immediately hooked by Dr. Who. (The Tom Baker era and yes, I even knitted myself a 13 foot long scarf. That I still have. That I still sometimes wear. Now stop laughing at me.)

My deepest, darkest, most secret wish? I wanted to be a companion. I wanted to step into the TARDIS and go somewhere/somewhen else and have adventures with the Doctor.

Now that I'm a writer, I will wish for the next best thing: to be involved in the series and write a script for the show. Just thinking about it makes my inner fan girl squee. :)

So there you have it. My most embarrassing secret wish. 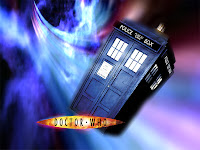