This year, between the wreck of my house after the flood and the real life horror show of reconstruction and contractors, I really didn't have a lot of reserve left to plan Halloween. Add to that a husband with a crazy bad few weeks at work, and it almost left Halloween 2009 in the lurch. 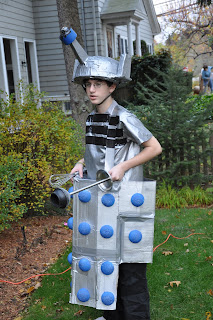 Lucky for me, my son wanted to go as a dalek, and working on his costume got me in the 'spirit' of things.

There are LEDs on the helmet and yes, that's a whisk in one hand, a plunger in another.

He recorded the nasal twang of 'ex-ter-min-ate' on his ipod and he was good to go.

This is what the house looks like before Halloween:

And this is what it looks like after the transformation.

We had a graveyard with open graves that was supposed to be a lot eerier than it was, but the fog machines weren't effective--the huge amount of wind we had just blew the fog to shreds. 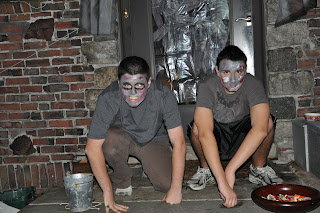 Luckily we had enough chocolate to stave off a mad zombie invasion. 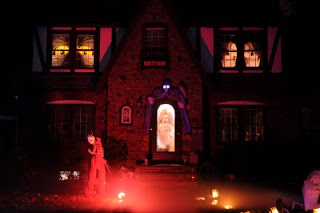 If you look carefully, you can see the shadow of my hell hound in the front door, guarding the portal. . . entrance to the house.

Perhaps next year, we will be able to rise to our usual standards, and my partner in crime won't be called into work on Halloween eve.
Posted by Lisa Cohen at 6:08 PM