This is me: An adoption story, part 2

Yesterday, I started to tell the story of my search for my birth family. If you haven't yet seen part 1, it's here: http://ljcbluemuse.blogspot.com/2018/07/this-is-me-adoption-story-part-1.html

So, we're at the point last October when I realized I hadn't lost my adoption file in our 2010 house fire and that the paperwork had been in a box in the attic for the prior 7 years.


The file consisted of about a dozen pages of handwritten notes - information about my birth mother, her parents, birth father, his parents, 2 letters she wrote to the adoption lawyer, a CA birth certificate, and the court proceedings ratifying my adoption.

The last time I had googled her name was early in the 2000's and didn't find anything helpful. This time, my search turned up a genealogy website with her name on a family tree. The limited information that was there matched - including her birthdate and my first shock was finding that she had died in 2010.

My second was that she had been married and had had one child.

Somewhere in the world, I had a half-sibling.

I spent some time looking for her husband and finally found him and his email address. I sent him a message, but never got a reply. (7 months later, I still have not.) Another dead end.

I told a friend what I had found and she decided to do some internet sleuthing. She found that Robin's brother had a large internet footprint and even found his online family holiday letters, including photographs of Robin in adulthood. And though his website, I had his email address.

Everyone I showed the photos to told me how strong a resemblance they saw.

Suddenly I had to make a choice. Do I try to contact this man? How would I be received?

This was no small matter.

Because this wasn't the first time I had held these papers in my hands, facing a similar decision. 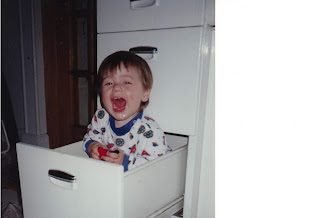 In 1993, my first child was born. A son. With my blue eyes and black hair. My round face. It was like looking down at an infant version of my own face and it was an incredibly powerful moment: Here was the first time in my life where I was actually in the presence of someone I was related to.

It made me understand that my past wasn't just a matter of my own curiosity, but a deep need to connect my history with my future; especially for the sake of this new life I had helped create.

And, as a mother, I had a surge of emotion and empathy for my birth mother. If I had to give up a child, I would want to know that child was okay. That I had made the right choice for that child's best future.

I was determined to let Robin know I was okay. I was more than okay. And I felt she deserved to know she had a grandchild in the world.

I've redacted the identifying information, but included in this document was her parents' address and phone number as of June of 1963.

I gathered all my courage. By this time, my son was about 5 months old, and looking more like me by the day.

I called the number.

It was Robin's mother.

When I told her who I was, she had her husband pick up the other line, and she began to interrogate me.

I don't remember the exact conversation - it was almost 25 years ago, and I was in a highly emotional state - but the gist was she didn't trust me. She kept demanding to know what I wanted. When I tried to tell her I just wanted to make contact, to let Robin know I was okay, she strangely responded that she wasn't going to give me any money.

I tried to tell her I didn't need money. I was a physical therapist. My husband was a physician. We had just bought a house. We were fine.

After making no headway in trying to get any information about Robin (they told me she wasn't married and had no children, which I later was to discover was not true), I asked for a photograph of her.

The woman who was my grandmother offered this: she would send a photograph if I swore never to contact anyone in the family ever again.

I didn't know what to say.

I stammered something about that being emotional blackmail.

They hung up on me.

I sat in front of our home computer shaken and weeping.

It took some time for the hurt to fade, but in some ways, it made me even more grateful for the incredible family I had.

I have a name - my Uncle. I have his email address.

And I have the painful memory of being rejected by his mother.

More importantly, I have a decision to make.